Gun-safety advocates want lawmakers to return to the Florida Capitol by the end of the month. (Globetrotter/Wikimedia Commons)

TALLAHASSEE, Fla. – While memorial services and funerals continue for the 49 victims of last week’s mass shooting in Orlando, a coalition of groups believes now is the time to turn grief into action.

The letter, signed by dozens of advocacy groups, asks lawmakers to return to Tallahassee for a special session on gun control before the end of the month. 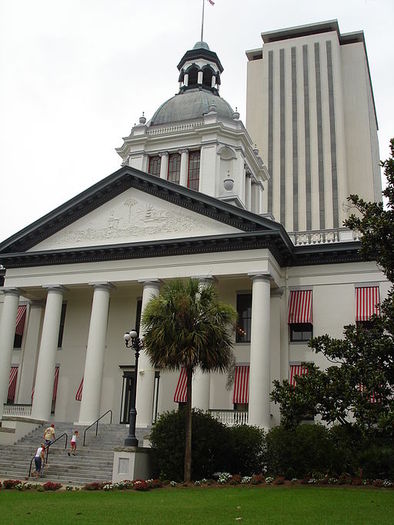 League President Pamela Goodman said she believes it’s the only way to turn the tide on gun violence.

“We strongly believe,” she said, “that an elevated discourse from the people of Florida to the only people that can actually change legislation – our elected officials – needs to happen now.”

The coalition wants the Legislature to make it a crime to knowingly import, sell, manufacture, transfer or possess a semiautomatic assault weapon or large-capacity ammunition-feeding device.

It also is asking the state to implement universal background checks. Scott has said he doesn’t believe gun-control measures are the answer, and blames radical Islam for the shooting rampage.

As a series of federal gun-safety measures hits Washington, D.C., this week, Goodman said Florida doesn’t have to wait to implement what she called common-sense gun legislation.

“This would follow precedents already in seven states which ban assault weapons,” she said, “and in addition it would allow Florida to join eight other states that already prohibit large-capacity ammunition-feeding devices that hold over 10 rounds.”