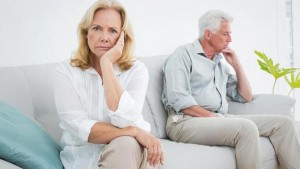 Getting unhitched this year? If you’re past 50, it’s critically important to pay attention to how your retirement savings weather the storm.

Divorce filings tend to surge at the beginning of the year, experts say. Parents with kids in school tend to hold out until the end of a school year, but when it comes to couples in middle age and beyond – the so-called gray divorce – the beginning of the year is often clean-slate time, said Tracy Stewart, a certified divorce financial analyst, accountant and financial planner in College Station, Texas.

And the overall numbers are getting big. Divorce rates among 50-plus couples roughly doubled between 1990 and 2013, and 30 percent of divorced women 62 and older who are still single live at or below the federal poverty line, said Susan Brown, a Bowling Green State University professor who has chronicled gray divorce trends.

Divorce can be particularly complex for people getting close to retirement, even if there are no children’s custody issues because of an empty nest. Beyond simply figuring out potential spousal Social Security benefits for marriages of 10 or more years, there are typically more assets to divide. There are often more illiquid investments, and more paycheck uncertainties as older workers struggle to stay employed at their current salaries.

While the present value of a retirement plan might actually be a couple’s largest asset, couples going through crisis tend to worry most about current cash flow and assets they use every day, said Howard Phillips, author of Dividing Retirement Plan Assets in a Divorce (divorcepensionrights.com).

That may be changing, however. Fifty-plus couples account for a big share of those choosing collaborative divorce, a type of representation that involves both sides committing to working out the best long-term financial outcome for both parties, rather than fighting through a judge or mediator, Stewart said.

“They’re mature enough to know they’re going to keep seeing each other through adult children and grandchildren,” so they opt for a less adversarial split, she said.

Maintaining the peace is particularly important when there are illiquid assets, such as pension, that can’t be cashed out by one party, said Wendy Wood, an attorney in Bryan, Texas.

Government workers, for example, might be in line for rich traditional pensions but have few liquid assets with which to cash out a spouse.

Retirement plan divisions in a qualified domestic relations order are also notoriously vague, so paying more attention to the details now is crucial, Phillips said. One proposal might call for a 50-50 split of assets in a 401(k) plan, for example, which sounds straightforward enough. But is it 50 percent of the entire account, or just the amount earned and invested during the marriage?

And don’t forget to scrutinize your beneficiary designations. Some states treat divorce as an event that essentially nullifies existing designations, and federal laws generally prohibit prenuptial agreements from dictating survivor rights when it comes to retirement plans, Phillips said.

Finally, acknowledge the fear surrounding the process as a way to deal with it and move on.