On October 6, 2015 a Florida House committee approved a bill to allow open carry in the Sunshine State.  So it passed the first round.

Florida is one of only five states and the District of Columbia that don’t allow any type of open carry. That could change.

If the new open carry bill becomes law you could see folks openly displaying their guns while you’re walking down the street with your kids.

At this point, it would  apply only to folks who have a concealed carry license, and go through the training to get it. You can still ban guns on private property, and you still can’t carry guns in schools, government meetings, airports, or bars.

The bill’s sponsor Republican Rep. Matt Gaetz says this will make Florida safer, but gun law expert Charles Rose says you should be wary.  “It’s a full out assault on the safety and welfare of the citizens of Florida,” Rose said.

Here’s the rub: Rose says the bill calls for probable cause to even allow police to question whether someone wearing a gun should really have it and that could, “allow folks who are illegally carrying more coverage,” he said. “They have literally created a standard here that says if you have a gun, you’re good to go, and unless you’re in commission of a crime, a police officer is supposed to leave you alone.”

So, even if someone looks suspicious with a gun on their hip, Rose says police would be bound to stay away.

“This is a straight on attack on the idea of the rule of law. You want to turn Tampa into tombstone, and it makes no sense.”

Folks are fired up on both sides of this issue. 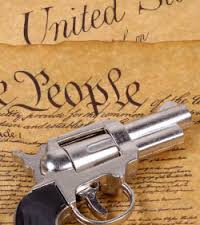 Concealed carry is working great in Florida.  It has over forty years of case law and other things interpreting it.  Most folks understand it.  Other states that are open carry have a history of open carry.  It’s the norm.  Florida doesn’t.  We’re used to the exact opposite.  When we tried open carry with CWL’s  back around 1987 there was a total uproar – and “concealed” became required because every urban area in Florida was screaming against it.

Florida has a fluid population, lots of tourists, lots of tourist destinations that will do everything they can to circumvent such a law on their properties, and a business community that will do the same.   It won’t work here.  Likewise, if it did pass,  within one to two legislative sessions the business community would force a new law that made it a crime to enter any business with a posted “no weapons” sign.  That would make your entry a felony trespass.  “Felony!”  Right now – you can do it unless they ask you to leave, or check your bags and refuse to allow you to enter.  Until then, you’re technically a “business invitee”.  But, once told to leave you become a trespasser if you don’t immediately comply.  Other open carry  states have this law.  No reason to believe it wouldn’t happen in Florida.  That would likely significantly restrict where you could go, whereas now, with a concealed weapon or firearm – nobody really cares except at the attractions.

We need a change in Florida law to allow open carry anywhere the property owner allows!  Currently, a home or business owner cannot authorize another person to open carry on their property unless it falls within one of the exceptions in F.S. 790.25.